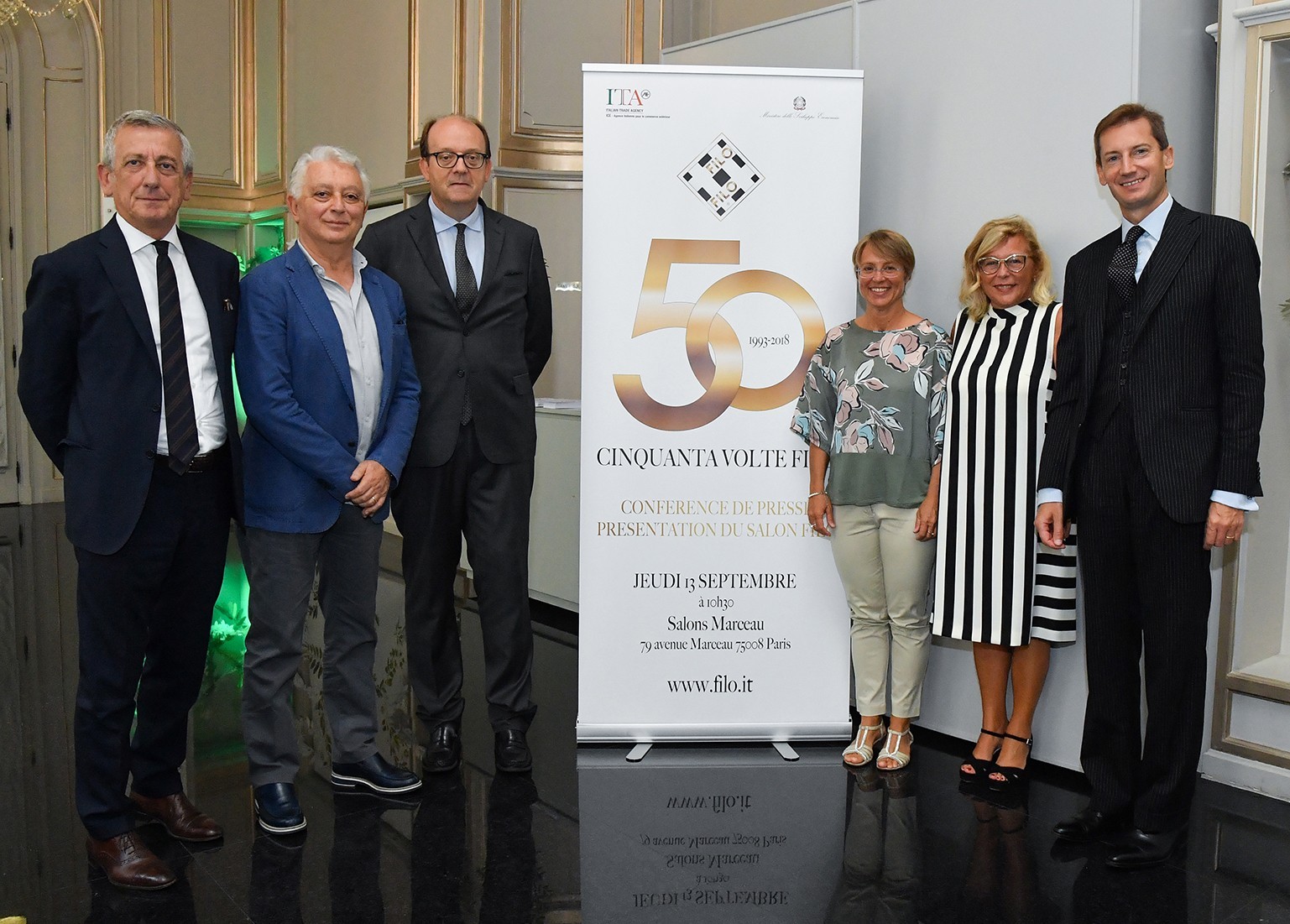 Filo’s stop over Paris for the presentation of the 50th edition of Filo (starting on the 26th of September at Palazzo delle Stelline) has been a success.

At the meeting, held in Paris on the 13th of September at Salons Marceau, many international operators have been present, a proof of the great interest for the Yarns and Fibres’ Exhibition.

The meeting – that had been organised in strong cooperation with ITA – Agence Italienne puor le commerce extérieur – hosted Pietro Perco Vacanti, Premier Conseiller Economique Ambassade d’Italie, followed by the interventions of Giovanni Sacchi, director of ITA office in Paris, and Paolo Monfermoso, manager Filo. While Gianni Bologna, in charge of Filo’s creativity and style, presented the products’ development proposals carried out for the 50th edition Filo, under the title “Routes”, that celebrate the three famous routes representing a source of inspiration: “Spices route”, “Silk routes” and the American “Route 66”. Pietro Perco Vacanti, while welcoming the speakers, stressed how Italy is the only country which has maintained an integrated textile- apparel pipeline and how Biella’s district, within this supply chain, represents the spearhead. During his speech, Paolo Monfermoso highlighted how Filo is a unique fair the textile industry, a real B2B fair; in the last 3 years, it has reached and overcome the ambitious growth’s goals that assigned’. “Our presence in Paris – as Monfermoso said – proves the willing to continue along the path of growth and internationalisation that Filo has started. Our successes always come from team’s efforts, first of all with ITA Agency. Therefore, we are convinced that to continue to grow and show the power of Italian supply chain, we need to build and strengthen synergies with the various players of the system. Having said that, the choice of Filo of being present within the trends area of Milano Unica is a concrete example”.

On his hand, Giovanni Sacchi has focused on how spinning represents an excellence of the Italian textile-apparel industry, as figures on production and exports prove. Mr. Sacchi stated that: “It is a sector that has always worked with France, where textile-apparel industry keeps important positions despite the re-organization occurred over the past years. There is no doubt that the light recovery of French apparel industry is also due to the cooperation with upstream Italian industry segments, as for example yarns’ segment. Data show us that this is a niche sector: exports of Italian yarns in France in 2017 account for 145 million euro. But it is a niche with wide growth margins, and meetings like this today can contribute to raise among French operators the awareness of quality of Italian products and companies”.