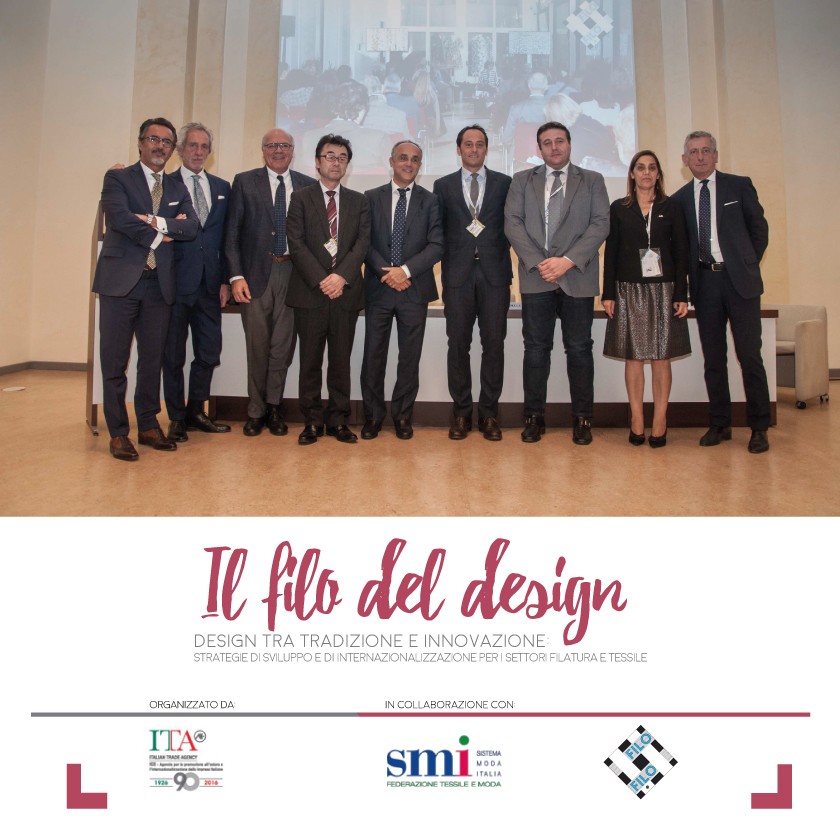 The 46th edition of Filo was officially inaugurated trough the conference ‘Il Filo del Design’, organised by Filo in partnership with ITA-Agency and Sistema Moda Italia. The core of the debate was about strategies for companies’ development and internationalisation, starting from innovation and enhancement of Made in Italy, focusing also on the re-discover of the archives of textile companies. During his speech, Carlo Piacenza, president of Unione Industriale Biellese, stated “Textile industry is complicated, with a long production process, but its different sectors are demonstrating to be able to communicate and work as a team. On the other hand, the intact supply chain is a fundamental competitive advantage and allows the Italian textile-apparel industry to continue inventing and innovating”.

The Undersecretary of State, Ivan Scalfarotto, sent a message to the 46th edition of Filo. In his message, Mr. Scalfarotto underlined “The tenacity of the industry, the decision to focus firmly on quality and presence in foreign markets have allowed to brake the descent and to defend a significant export share”. Then he added: “The textile and fashion industry, this sector is greater part of the Made in Italy and the same idea of Italy in the world, has more and more courage and strength to think and move in unison. Not to impoverish or deny joints and specificities that are valuable, for yarns as for fabrics and fashion: on the contrary, to summarize them and set this all in a general framework of primacy”.

Michele Scannavini, president of ITA-Italian Trade Agency, rested on the concept of the supply chain as a competitive advantage: ‘As far as the concept of supply chain is concerned, Italy manages to build strong competences along the entire value chain. Within spinning sector, creativity and innovation emerge above all, that is to say those features which more than anything else distinguish Made in Italy worldwide”. Gianfranco Di Natale, general director of Sistema Moda Italia, highlighted that “Working meetings as these ones represent the fil-rouge which connects Filo and Sistema Moda Italia for offering to the companies new developing and internationalisation strategies. It is a common path that we can carry out thanks to the partnership with ITA-Agency, especially regarding small and medium enterprises”.

Danilo Craveia, responsible for Archivi Storici Biellesi, presented ‘La Filatura e il Tessile’, a show realized exclusively for the 46th edition of Filo. Mr Craveia stressed how “Archives are not a product from the past, but the stratification of many futures; it represents a heritage of know-how which lays down and lets creating variations on a solid knowledge’s heritage”.

According to Marco Bardelle, president of PoinTex, the starting point is the question “Which is the future we envisage for textile companies? It is a future growing on unthinkable and sustainable innovations, to let Italy continue to grow. However, companies must believe in the value of innovation, while governments should make red tape simple for those people who try to innovate”.